This article originally appeared in Emmetts Field of Dreams magazine. Get your copy here.

Brown Brothers are a family owned winery with a 130 year legacy, operating six vineyards across Victoria and Tasmania, with an internationally recognised brand. They are part of The First Families of Wine, a 12 strong Australian collective of celebrated wine growers, all with vineyards
over 50 years old.

John Lazarou has been the Vineyard Manager at Mystic Park for over ten years and attributes the success of Mystic Park to the innovative and family-oriented culture that is promoted by Brown Brothers. Mystic Park is the largest vineyard in the Brown Brothers group at 245 hectares, located South East of Swan Hill Victoria on the Murray River. 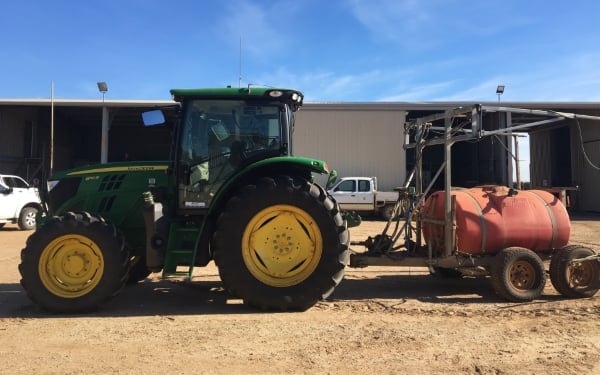 When asked about past business or production decisions that have contributed to the business Brown Brothers are today, John highlighted the innovative mindset of Brown Brothers. This innovation was demonstrated in the late 1990s when the family identified the need to develop a grape variety that differentiated the Brown Brothers wine from other Australian grape growers and wine producers. In the late 1990s, vineyards were being planned on mass and Australian wine was taking off internationally. In 2001, Brown Brothers planted a newly developed variety that suited requirements for individuality. This variety named Cienna, a blend of Sumoll and Cabernet Sauvignon grapes, was developed by the CSIRO in 1972 with the aim of developing a wine to suit the Australian climate. Brown Brothers own the exclusive rights on this variety, and the initial investment continues to be a sound one.

John explained “The decision to grow a popular and easy to palate product like Cienna has contributed greatly to the success of Brown Brothers. Cienna is unique to Brown Brothers and gives us exclusivity in the market. Cienna provides a light and refreshing flavor profile, boasting aromas of fresh red berry, a hint of spice and a slightly frizzante finish.” The decision to seek a varietal difference has paid off with Cienna being a winning market choice for customers, with their 2018 vintage being highly sought after.

The vineyard at Mystic Park has had a long relationship with John Deere machinery. Emmetts has been supplying Brown Brothers of Mystic Park since it opened the Swan Hill branch in 1999. Mystic Park currently operates two 6110R tractors and a 6110M which John and his team of five staff use daily. John said “the team enjoy working with the 6110R for its comfort and ease of use, which makes a great difference during long days at harvest.”

John discussed the benefits of Infinitely Variable Transmission (IVT) in the 6110R to the day-to-day operations at Mystic Park. The capability to deliver continuous power across a variable range of speeds provides John and his team the ability to effectively maneuver these machines through narrow vine rows. “We control the speed of our tractors exactly with IVT and it allows us to maximize productivity. As we are often travelling at 3km/Hr, the ability to control increments of speed are very important to us.”

Mystic Park’s vine spacing is unusually wide at 11 feet, whereas the industry standard is between 8 to 10 feet. Traditionally, rows in other wine regions are spaced close together to allow for a greater number of vines per ha. However due to the elevated levels of sunlight in the Murray Valley, wider row spaces allow for more hours of sun on the vines which increases yield across fewer vines per ha. John highlighted other benefits of wider row spaces which include ease of maintaining vine rows and the ability to navigate large 6 Series tractors, with their ergonomic large and comfortable cabin, he was not willing to sacrifice cab comfort for a smaller tractor.

John is excited about the future of viticulture and the advances that Precision Ag technology will bring to the industry. John is looking forward to implementing Precision Ag technology, using GPS to assist with maintaining vine rows on the property and utilising Autosteer on the 6110Rs and 6110M series tractors. Other opportunities for Mystic Park and other Brown Brother vineyards include variable rate fertiliser application and yield mapping. The ability to display an increase in productivity is key for John when choosing to implement Precision Ag tactics to the Mystic Park property. John is eager to see the future innovations that John Deere will create in Precision Ag throughout the coming decade, and how these advancements can further provide value to Mystic Park and all other Brown Brothers vineyards.

A huge thank you from the Emmetts team to the Brown Brothers family and John Lazarou for continuing to push Brown Brothers and the Australian wine industry into the international forefront. Thank you for the 20+ year relationship with Emmetts.