Great Deep Rip Off by the Mullewa Dryland Farmers’ Initiative

The Paddock Finish
Four days after the ripping demonstrations took place the site was assessed for breakout and paddock surface finish. The following breakout profiles give an indication of how deep each ripper is working and the volume of soil broken out.

Depth of ripping is dependent on tine length, soil type, strength of soil, and tractor horsepower. Other considerations include traction, trash flow and soil moisture conditions. To achieve the optimal balance between depth and area ripped it is important to assess ripping depth and make the required adjustments on the ripper or tractor as conditions vary.

Soil breakout is dependent on many factors including; spacing of tines, point size and shape, depth of ripping, soil type and moisture conditions. All of these things influence the shape and volume of loose soil after the ripping pass. The breakout profile of a single tine forms a basic ‘V’ shape. The width of the ‘V’ can be influenced by the width of the point at the base of the tine. A wider point produces a ‘V’ with a wider base and effectively shatters more soil allowing tines to be spaced further apart. The amount of draft, and required horsepower are related to the width of points and spacing of tines. Irrespective of manufacturer it is possible to manipulate each of these to give the required ripping results.

Rollers are important for the finish of soil surface. They firm and level the surface to enable sowing depth control and good establishment. The influence of the roller is largely design and weight specific. The roller is required to break clods that emerge to the surface and level inter‐row ridges left by the tines. Rollers also impact the stubble cover that remains which is an important consideration for erosion risk particularly on sandy soils. There were a number of rollers present at the demonstration, some an integral part of the machine others an attachment. Images of the resulting soil surface are included in this document.

Before ripping one of the most important considerations is how the paddock is going to be sown. Deep ripping does leave the paddock very soft and seeding implements are vulnerable to sinking and sowing too deep. Combined with the recompaction that occurs within the first pass, a large investment in the soil can become redundant within 12 months. The value of deep ripping is in the number of years of yield response from one rip. Controlled traffic needs to be considered as part of any deep ripping system to minimise re‐compaction and increase the longevity of the benefit..

Method
For this demonstration break out profile and resulting surface condition measurements were taken using a 25mm steel rod from a datum line levelled from the tramline. In this instance the tramline provides the point of soil level zero. Often the level of the tramline is below that of the soil surface. Keep this in mind when assessing the final ripping depth. This is only an approximate indication of the soil profile ‘softness’, further confidence would come from increased sampling throughout the treatment. Penetrometer measurements were not taken in season as optimal soil moisture conditions did not present as required.

Final yield and quality parameters
This trial was incredibly variable and difficult to draw distinctive conclusions from. It would appear that the deeper ripping achieved greater yield. Which goes some way to explaining the differences between the rippers as each was set to rip a different depth. When reading these results please consider the depth of ripping, the established plant number, also that the paddock was severely wind blasted during early establishment.
Unfortunately we missed taking a grain sample from the Radium PowerRip plot so quality parameters were unable to be completed for this treatment.

Following results presented with the permission of the owner/manufacturer

A very uneven surface after ripping is evident. There was no roller attached. Dry surface soil to 20cm combined with the mouldboard buried topsoil held soil together well and brought up large clods to remain on the surface. The maximum difference between high and low points within surface is 120mm. Surface was also left relatively cloddy as there was nothing to crush clods after the ripper passed. If dry sown the alternating surface and large clods may cause difficulty for even crop establishment. 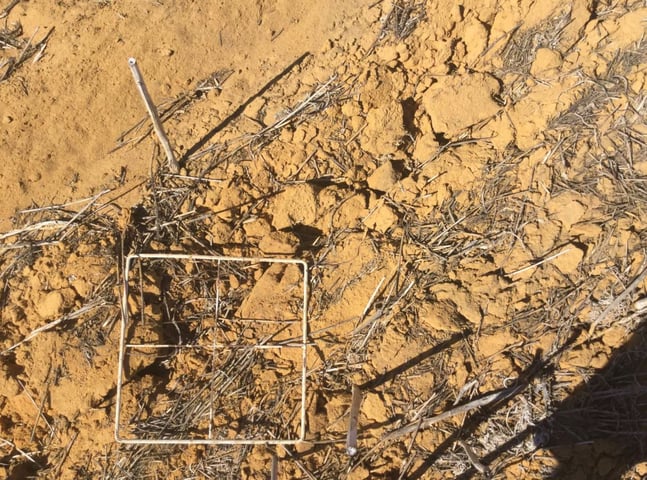 A good percentage of 2016 canola stubble remains standing and large, firm clods are also present on the surface. This decreases wind speed at the soil surface and reduces the risk of wind erosion. A good percentage of 2015 wheat stubble is also still present though unlikely to prevent erosion as it is not anchored to the soil.

The ripper was set up for a ripping depth of 300‐350mm. Topsoil slotting plates were bolted to the rear of the ripping tines. These plates had been lifted to a height where they were only 10‐30mm below the soil surface.
The breakout profile is very consistent to a depth of 300mm. The graph indicates slightly deeper ripping at the tine.
The Rite Way roller left the smoothest surface of all rollers at the demonstration. Only few clods were still visible after the ripping pass. Stubble was also left intact, unbroken, on the soil surface giving the surface some protection from wind erosion though no longer anchored to the soil.
Maximum surface discrepancy is 100mm.
Small trenches in the surface were the result of topsoil slotting plates being too high and not allowing surface soil to ‘back fill’ the open slot.
The owner of the machine made mention of the need to keep the plates high as if any lower the plates were working at the depth of the hardpan and the tractor was unable to pull it. 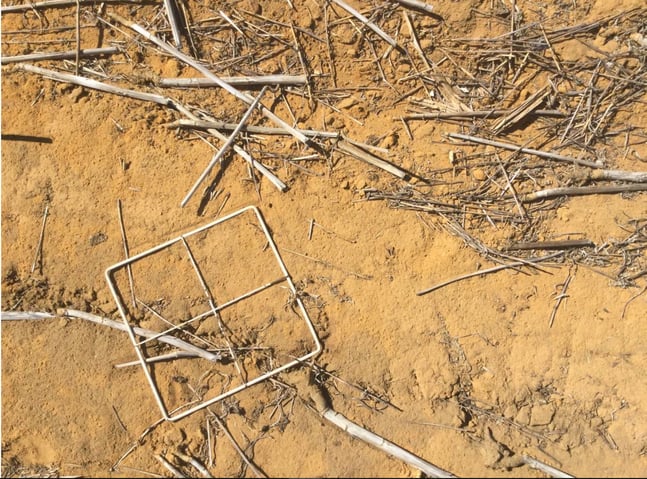 A large amount of soil has been lifted and moved during the ripping process. This is evident in the measurement of surface level, with respect to the tramline. While the surface is relatively level it is 100mm above the tramline. This indicates the soil is quite “soft” and may cause issues at seeding. where bar wheels do not run on firm tracks.

Soil surface is left quite bare as canola stubble has been smashed then buried by the shark fin roller. A dimpled effect is created by the roller on the soil surface. 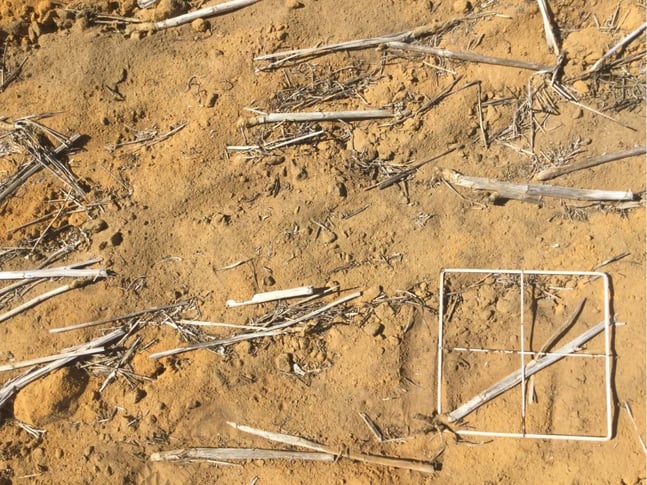 The coil packer on the rear of the ripper was not sufficient to leave a completely level surface. Discrepancy of 180mm exists between highest and lowest points in the surface. Largest furrows exist in the line of the tine and suggest that the packers did not apply enough weight to relevel the soil. A sufficient level of stubble remained on the surface for prevention of wind erosion.

Maximum depth of ripping is approximately 520mm. There are distinct unbroken inter‐tine ridges below 300mm where soil strength remains high. There is complete breakout of soil above 300mm. 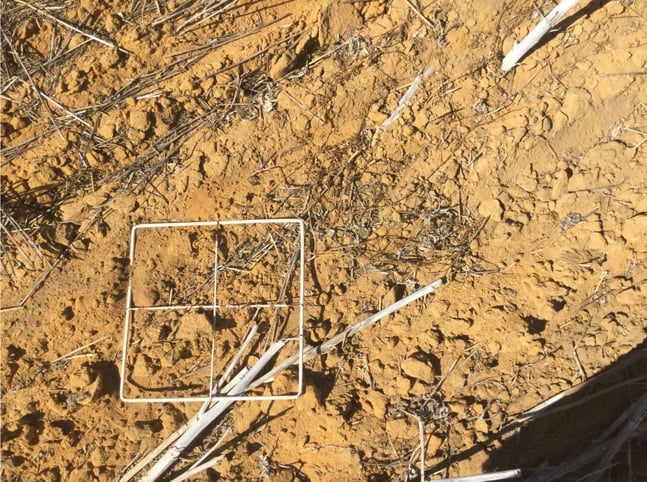 There was a large amount of soil movement with soil surface lifted 100mm above tramline. This is an indication of the softness of the soil and will require consideration before seeding into. In spite of this lifting of the soil surface it has been left relatively level with the roller breaking clods and smoothing the surface.

The hammerhead points are the reason for the large volume of broken soil between tines. There are not definitive unbroken ridges between tines which will add to the softness of the soil for any seeding traffic.

Maximum depth of ripping is 390mm with average ripping depth 300mm in the plot measured. After adjustments were made to the ripper later rip runs went deeper, these were not measured. 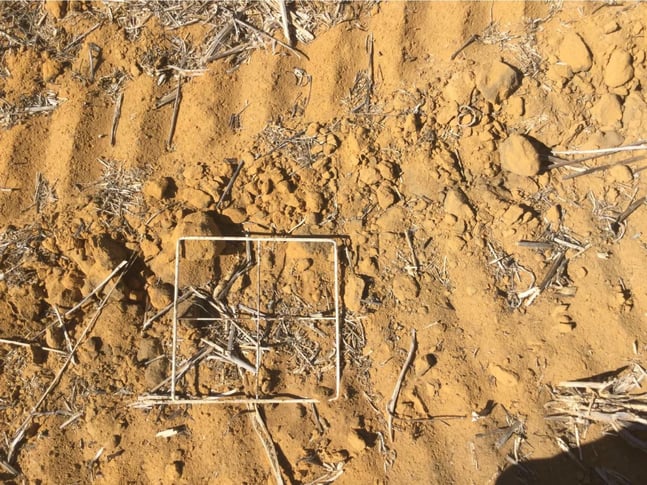 Note that this ripper is a prototype with many adjustments available and doesn’t represent the design changes made on following models.
Ripper Details
Width (m); 7.2m
Tine spacing (cm); 480mm
Roller: An integral part of machine at 900mm diameter. Total machine weight of 16t. Rollers will be produced at 1200mm diameter. 3 rollers on this machine.

Roller successfully crushed any clods brought to the surface. The soil was very soft causing the heavy rollers to bulldoze and leave a ridge between rollers. These ridges caused a discrepancy of 170mm between highest and lowest level at this site.

The breakout is quite variable as is the depth of ripping. This machine is capable of deeper ripping depths. Maximum ripping depth is 370mm with average ripping depth of 270mm. The edge of the ripper did not rip as deeply as the centre. 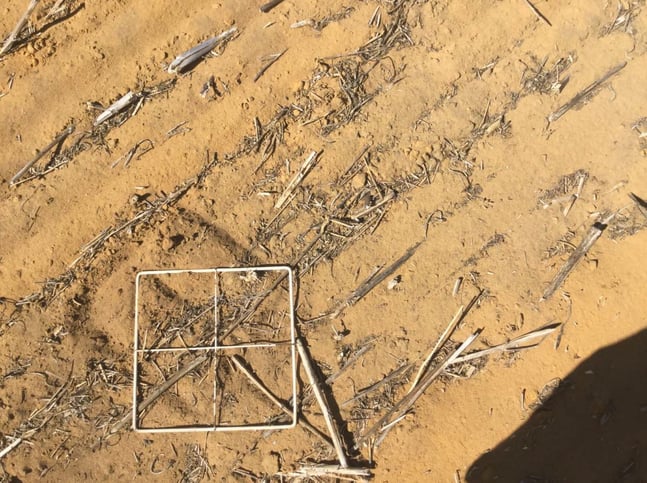 Measurements showed very clear ridging of unbroken inter‐row between tines. Depth of ripping between 450 and 500mm, though complete breakout is to 250mm.
Surface heave generated by the ripper has left a discrepancy between highest and lowest point of 160mm to deal with at sowing time. Lowest point in the surface is consistent with the centre of the topsoil slotting plate. The peaks in the surface approximately match the centre between tines where soil has been moved to through the action of the slotting plates. 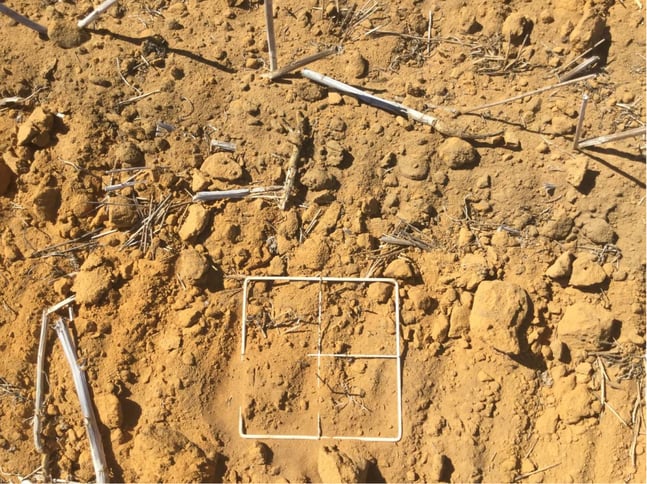 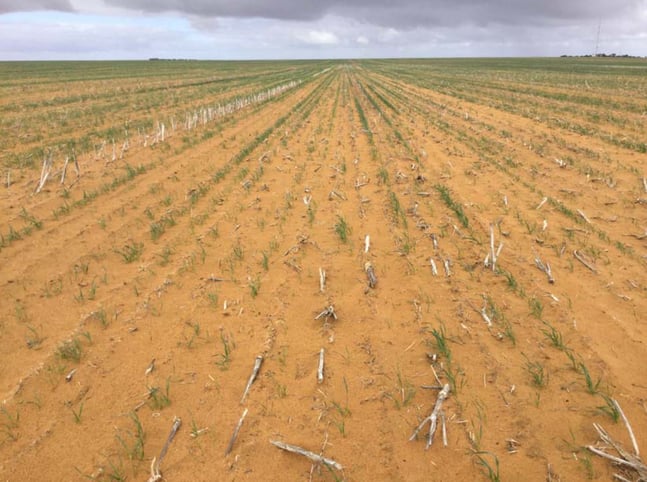 Image 8. An image of a representative plot from the site on the 12th of July. 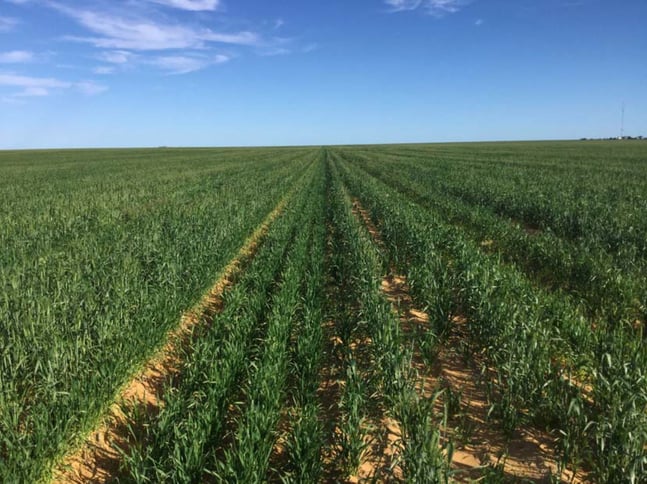