The Secret to Good Hay

We visited Dale Frankel, hay contractor, just outside of Sheep Hills to find out how the hay season is going. We interviewed him October 24, and his hay was a beautiful range of greens. 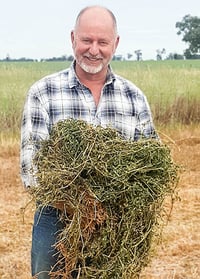 Dale is a customer of Derek Reid’s at the Rupanyup branch, and since this is the Hay and Harvester issue, we needed some info from the field on how this season is looking. The good news is the hay was looking great on the day of writing this article. The bales produced by Dale’s Krone balers were like bricks, and the colour variation in his paddock was excellent.

The other good news to report is, Dale is happy with the John Deere W260 Self Propelled Windrower he purchased last year. After giving it a try on demo, he decided to keep it. It helped him to get through the dense forage that the 2016 hay season produced. He went with the V10 rollers rather than the tri-lobes in the W260 as they crimp the rye grass, balansa and clover all evenly, to assist with consistent drying time.

Dale has been growing hay for years, at 14 he was baling little squares and selling them at Drysdale on the Bellarine Peninsula. He then bought one of the first large square Massey balers to come into Australia. Many of the producers around the Sheep Hills area didn’t think it would be a viable business, with most farmers cutting hay one in every five years.

Dale talked to farmers about the idea of growing hay as a crop, as he was building his contracting business. The hay market had always been sporadic, but as dairy continued to advance in their feed science, high protein quality hay began to get recognised within the market. Over time, local farmers have increased the acreage of hay across their cropping plans.

Dale believes that hay has not yet reached it’s full potential in the area. With the increase of rye grass resistance, he believes that more producers will start to integrate hay crops into their production cycle.

For the best hay, Dale suggests investing time in preparation:

• He suggests a speed tiller to get the trash incorporated into the soil.

• Rolling must be carried out to level the ridges to avoid damaging your cutting bar. Rolling will also help to press in the rocks if you have rocky ground.

• Raking - he likes to rake two mower conditioned rows into one before baling.

• He believes in inter-row sowing, and having a strong bed of stubble to prevent any contact between the windrow and the soil for curing.

• He believes that raking two rows into one the day after cutting is perfect for curing. Rake another two rows into one for big windrows to make perfect bales. He predicts people will start to buy bigger rakes for this reason.

• The introduction of steamers in the last few years has enabled contractors to work more hours in a day. The steamer sits between the tractor and baler and artificially introduces humidity to the forage to reduce breakage and loss of leaves if the conditions are too dry.

What has changed over time:

• When Dale first started his contracting business, the hay season stretched out over a longer period of time. He would start baling in Northern NSW for a week to ten days, move to the Riverina for ten days, spend ten days in Patchewollock and Warracknabeal, move to Minyip and finish in Port Fairy after three months. Now, he said the season all hits at once, regardless of the area.

• Dale is a big fan of Medic hay which has decreased in plantings over the years because of the residuals in the soil, with vetch continuing to gain popularity because of its ability to tolerate the conditions.

• The development of the export oaten hay market has been great for everyone in the industry.

Dale was honoured to receive the National Feed Central Award 2016/2017 for his hay last year. He was given the national hay quality award for the best vetch hay visual appearance score. He uses feed central to have his hay inspected and tested prior to sale.

Dale has four grown children, one is an engineer and the other three are ag scientists. His two daughters are involved in animal production and export, and his son is farming at Murtoa North and helps with the hay operation. Dale’s wife Noela also has a son in the agricultural manufacturing business.

We would like to thank Dale for this interview and for supporting Emmetts Rupanyup with his business.